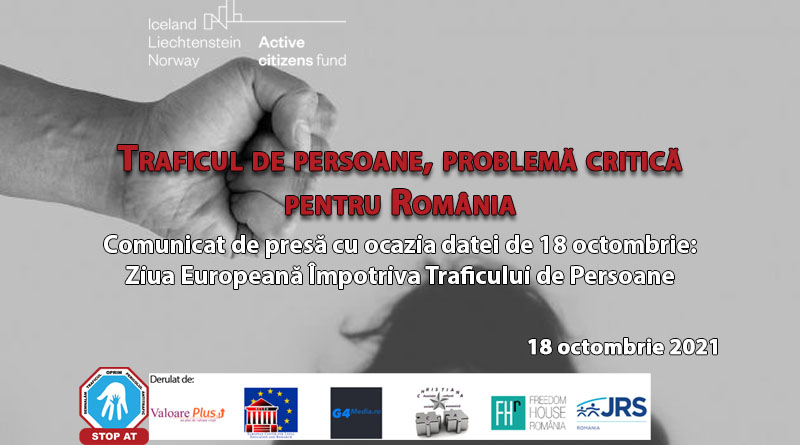 Trafficking in human beings, a critical issue for Romania. Conference with international participation in the European anti-trafficking week.

October 18 is the European Day against Trafficking in Human Beings, a phenomenon that is wreaking havoc in Romania. According to the latest report of the US State Department, Romania does not meet the minimum standards for the elimination of human trafficking and is the main reservoir in Europe for victims of trafficking for sexual and labor exploitation.

With a social assistance system severely affected by the coronavirus pandemic and underfunding, Romania has major difficulties in combating the phenomenon to which the European Union has dedicated a special day. According to the current trends identified in the Report recently published by the European Union on human trafficking, the number of exploited Romanian children has increased 10 times in the last 2 years of reporting.

According to the report of the US State Department, Romania remains on the surveillance list at tier 2 for the third consecutive year, in our country the phenomenon of human trafficking being the most accentuated in Europe, comparable only to the situation in Ireland or Belarus. In tier 3, the most problematic in the State Department report, are countries such as Russia, China or Cuba.

To address the main challenges facing Romania in preventing and combating trafficking in human beings or protecting the survivors of this phenomenon, the European Center for Education and Legal Research (ECLER) is organizing during this week the 7th edition of the conference “Together against trafficking in human beings: Romania’s challenges in the fight against human trafficking ”.  The conference is organized within the STOP-AT project and will take place on Friday, October 22, 2021, in online format.

Eradicating trafficking in human beings, in the current pandemic context, is impossible without strong European cooperation in criminal matters, with an integrated and comprehensive approach. Preventing child trafficking remains, by far, one of the main challenges facing Romania today.

The debate will be attended by magistrates and lawyers, police officers, labor inspectors, psychologists, social workers, civil servants, doctors, researchers and teachers, representatives of NGOs, as well as foreign diplomats in Romania. Conference participants are asked to pre-register by filling out the online form by October 21, 2021 to receive a link to access the event and apply for an attendance certificate if necessary.